“People don’t look at things like hip-hop or country anymore — they are looking at things based on events and activities…We need to be able to deliver the right music based on who we are, how we’re feeling and what we’re doing, day-by-day.” — Daniel Ek, Spotify 2015 press conference (via Cherie Hu at Billboard)

Since we’re all about tracking playlists at Chartmetric, we’re curious about the future: will playlists be more content-based or context-based?

Content-based (CN) would be what some of us older music fans were used to growing up: genres or language or geographical boundaries playing major roles in not only what radio stations played for record labels produced for us, but psychologically, what even we allowed ourselves to listen to.

Fast forward to 2018 and we have Spotify dominating the streaming game and soon to be publicly traded on the New York Stock Exchange. With it comes their data-fueled strategy and how they can better serve the listener by shaping the ecosystem to them, generating what we’ll call context-based (CX) playlists. Whether it be an activity (e.g., running, romantic dinner) or time-related event (e.g., Women’s History Month, Lunar New Year, or just a day of the week), CX playlists are quickly becoming the new paradigm in which we experience the music we knew yesterday and will discover tomorrow.

This is no small shift: search “contextual marketing” and you’ll have enough reading material for 1,000 hours. In most sophisticated industries, contextual marketing has long since bridged the perceived gulf between so-called traditional marketing and digital marketing. Yet, the music business has been locked into a genre-based listener segmentation that’s dictated radio station programming and kept international markets at arm’s length for all but the most culturally intrepid.

Enjoy the discussion? Join us for our daily podcast, the “Daily Data Dump”, a 3-minute morning shot of music data as you start our workday.

Let’s see who’s winning the context (CX) vs. content (CN) trend by dipping into one of the main battlegrounds: Spotify’s Genres & Moods menu.

At Chartmetric, we’re tracking over 1 million Spotify playlists, and that includes the 973 (as of 9 March 2018) that are in its Genres & Moods menu.

A combined total of 370M+ followers enjoy the 973 Genres & Moods playlists, with a median of 123K followers for a playlist and an average of 381K. There are 38 total playlist owners programming this dataset, though Spotify unsurprisingly is the dominating selector: 92% of the playlists are Spotify owned and operated, with only 72 of them being from other companies (e.g., Universal’s Digster, Warner’s Topsify, Sony’s Filtr, EA Sports, BBC Music).

The playlist group also feels quite young: slightly more than half (52%) of the playlist IDs were created after March 2017. Though some of these new IDs were indeed revamps of a similar playlist from before, it still suggests that the pool has been undergoing a lot of experimentation. Any analysis done today will certainly be a unique data point for what this population will look like only another year from now.

There are 145 unique genre tag combinations (tagged by Spotify), which in of itself, is not particularly relevant save for how we’ve categorized the Genres & Moods playlists: CX, CN, or Hybrid (HB). HB playlists are just as they sound: a mix of context and content purposes.

For example, “K-Pop Acoustics” (108K follows) is clearly a content-based playlist (tagged as the genre “K-Pop”) and “Nature Sounds” (151K follows) is clearly a context-based playlist (tagged for the user purpose of “Focus”). However, “Bleeps & Bloops” (145K follows) we define as hybrid, as it is tagged by Spotify as “Gaming” (user-defined purpose) and “Electronic/Dance” (genre). So when a user shows up at the Genres & Moods menu, they could be led to an HB playlist by either a context or content-related click path.

It’s also worth quickly highlighting how the term “Mood” may be inadequate here. Mood is often used to describe a type of emotional context, though CX curation is often based on a more sophisticated array of factors: location, time, season, weather, activity, current affairs to name a few. While an imperfect methodology, it will still give us a conceptual structure to work the numbers with.

Almost as an ode to traditional genres, CN playlists still make up the majority (57%) of the Genres & Moods playlist group. With over 211M followers (56%), this category includes the top Spotify sub-brand playlists such as Today’s Top Hits, RapCaviar, Viva Latino, and mint. Some of CN’s lesser known but still widely popular playlists are Are & Be (4M follows), Rock Classics (3.4M follows), and All-Out ’80s (2.2M follows). Genre and music eras, it seems, are still how the majority of us are used to navigating songs.

The context mentality, however, seems to indeed be on the rise: though only 36% of the group with 131M followers, CX playlists have a significantly higher median follower count (160K per CX playlist vs. 103K per CN playlist). Additionally, if we look at playlists over one year old, CX playlists have a higher median gain (68K follows vs. 59K CN follows) and a higher average gain by percentage (85% vs. 62% for CN gain). This would be in line with Ek’s 2015 statement listed above, as the Spotify platform continues to experiment with adjusting music to the user’s life, rather than the user adjusting to the music.

The plot thickens further: though only 7% of the group (27M followers), HB playlists (237K median follows) totally outstrip CN (103K) and CX (160K) categories in terms of their typical playlist follower count. They also show the highest growth over the past year with the highest follower gains by both average (88%) and median (56%) measurements, suggesting that HB playlists have been both viral and steady in their growth patterns. This seems natural considering that Spotify is directing both users who are context and content-oriented to the same HB playlists.

Playlists Will Evolve to Meet Our Needs

“Maybe that same song when you play it as you’re about to go to the gym, it’s a deep-house or drum’n’bass version. And in the evening it’s a bit more jazzy. The song can actually shift itself. The entire genre can change, or the key it’s played in.” — AI Music CEO Siavash Mahdavi (via Stuart Dredge at Music Ally)

London-based startup AI Music is part of Abbey Road Red’s music tech incubator program and looking to change the very way we listen to a specific song- let alone a playlist- through automated compositional morphing of the actual track and what he calls “contextual AI”.

“Imagine the same playlist but you could have it across 100 different moods. You could literally hear the same songs but as the chilled acoustic versions, or maybe the lyrics are removed because you just want to write something…” he continues.

Exciting as it may be, the success of Mahdavi and crew is not as relevant as the larger trend his company and others like it are answering: music startups are moving more and more towards meeting the audience on their own terms. Moreover, with the depth and complexity of contextual data capture increasing, there is unlimited opportunity for alternative revenue generation for rights-holders and creators besides streaming. Imagine how fashion outlets, the automobile industry, or grocery stores could tailor a personal shopping experience through your earbuds as you walk the aisles.

But until then: Context is king. Content is content. At that least that’s what seems to be upon us. Whether we’re in the gym, ready to blow off steam on Friday night, or celebrating Women’s History Month, our analysis of the Spotify Genres & Moods dataset seems to reinforce this sea change in music streaming.

How do you see other ways music tech companies are bringing a customer-focused mentality to the music industry through context? Let us know at social (at) chartmetric (dot) com! 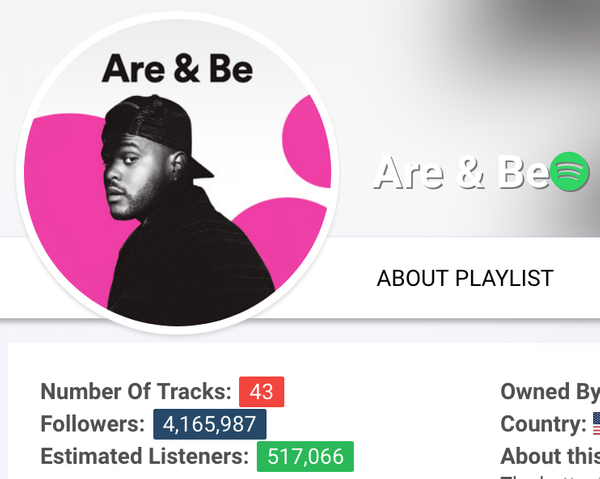 Not all playlists are created equal, and followers don't mean everything